Over the last three decades, the Hudson Shad quartet has most likely racked up more performances as The Family in Kurt Weill’s The Seven Deadly Sins than any other group in history. They have performed in over 70 different locations, from Arezzo to Zagreb, numbering well over 100 performances worldwide. They participated in a staging of the work, in a double bill with Weill’s Der Lindbergflug, at the Macerata Festival. They have thrice recorded the work: with Kurt Masur and the NY Philharmonic, with Marianne Faithfull, Dennis Russell Davies and the RSO-Wien, and with Storm Large and the Oregon Symphony under Carlos Kalmar. In 2008, Hudson Shad was honored to participate in the Carnegie Hall premiere of the work, with Ute Lemper and the Toronto Symphony. 2019 performances included The Seven Deadly Sins with Storm Large and the Oregon Symphony in May, with the Shanghai Symphony and Maestro Dutoit in July, and on tour in Germany with Ute Lemper and the Kammerakademie Potsdam in October. The June 10 performance with the Princeton Symphony Orchestra marks the seventeenth location for the Shad family unit with Storm Large since their initial encounter at the Ojai Festival in June 2014, and it marks a homecoming of sorts for two Shad grads of Westminster Choir College.

The members of Hudson Shad appearing in Princeton are: 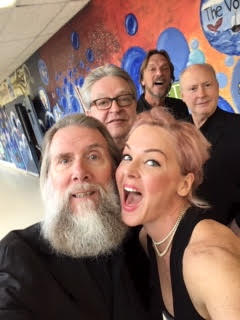