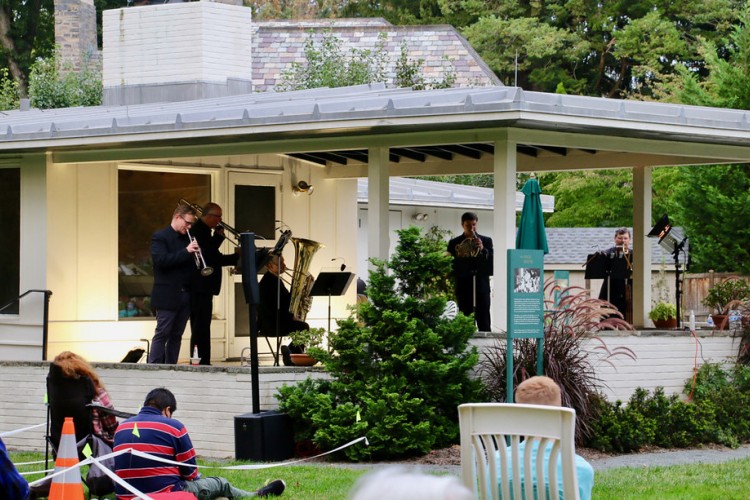 Tribute To The Big Bands
arr. by Irving Rosenthal
- Little Brown Jug
N. Washington (arr. Wuopio)
- I’m Getting Sentimental Over You
Bart Howard (arr. Gale)
- Fly Me to the Moon

Jerry Bryant is principal trumpet/orchestra personnel manager of the Princeton Symphony Orchestra and the Glimmerglass Opera Festival in Cooperstown, NY. He is also a member of the New York City Opera Orchestra and the Hartford Symphony Orchestra. A regular on Broadway, Jerry has performed with Wicked, My Fair Lady, The King and I, Beauty and the Beast, and the Radio City Music Hall Orchestra. He has also performed with the Metropolitan Opera, National Symphony (Washington D.C.), New Jersey, and Jacksonville symphonies to name a few.

Jonathan Clark is principal horn of the Allentown Symphony Orchestra and the Bay Atlantic Symphony, and a member of Symphony in C, Princeton Symphony Orchestra, and the Reading Symphony. Along with these orchestras, he also plays with the Philadelphia Orchestra, Philly Pops, Pennsylvania Ballet, and the Delaware Symphony Orchestra. Outside of the concert hall, Jonathan has recorded with NFL Films, played at the Walnut Street Theater, and played for the popular musicals Les Misérables and Miss Saigon on Broadway.

Thomas Cook, 2nd trumpet, has performed with the Princeton Symphony Orchestra since 1994. He is also 2nd trumpet for the Lancaster Symphony and the Academy of Vocal Arts Opera Orchestra in Philadelphia. An active freelance musician in the tri-state area, Tom regularly works with the Pennsylvania Ballet, Opera Philadelphia, the Reading Symphony, the Kennett Symphony of Chester County, the West Jersey Chamber Symphony, the Bristol Riverside Theater, and the Endless Mountain Music Festival. He has been principal trumpet for the Pennsylvania Philharmonic, the Greater Trenton Symphony, the New Jersey Capital Philharmonic, Princeton Pro Musica, and Boheme Opera of New Jersey, and other orchestras.

Lars Wendt has been the 2nd trombonist of the PSO for 26 years and has been involved with the PSO BRAVO! outreach program as a performer and, most recently, as a coordinator for the ensembles. He studied under David Uber while at The College of New Jersey (TCNJ) former principal trombone of the NBC Symphony Orchestra, NYC Ballet, and NYC Opera Orchestras. Lars performs with the Riverside Symphonia as 2nd trombone, and has performed with the former Garden State Pops, Trenton Symphony (Capital Philharmonic), and the Westfield and Plainfield Symphony Orchestras. His musical interests are broad and he performs with a variety of ensembles playing jazz as well as pop.

Back by popular demand, our brass ensemble returns with all all-new program including music of John...