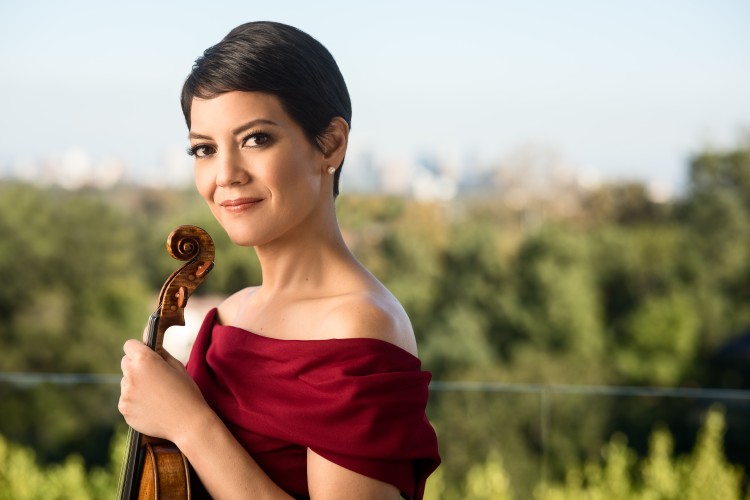 PSO debuts include star soprano Pretty Yende performing arias by Rossini and Verdi, plus violinists Anne Akiko Meyers and Elina Vähälä and violist Roberto Díaz, each showcasing their talents with works respectively by Arturo Márquez, Benjamin Britten, and Hector Berlioz. Piano virtuoso Inon Barnatan marks his return appearance with the PSO with a performance of Brahms’ Piano Concerto No. 2.

All performances take place on select Saturdays at 8pm and Sundays at 4pm, at Richardson Auditorium on Princeton University’s campus. Rossen Milanov conducts all concerts but one, which will be led by guest conductor Sameer Patel.

Maestro Milanov is enthusiastic about the season. He says, “I am excited to announce PSO’s new season with concerts taking place at our acoustically superb and intimate home at Richardson Auditorium. I hope everyone will be inspired by the variety and richness of the repertoire, the incredible artistic partners we will share the stage with, and the opportunity to hear unique and diverse musical stories.”

The season opens the weekend of September 10-11 with the incomparable Anne Akiko Meyers performing the melodies and dance rhythms of Mexico’s leading composer Arturo Márquez’ Fandango violin concerto, commissioned by Ms. Meyers and recently premiered with the Los Angeles Philharmonic at the Hollywood Bowl. Another highlight is the US Premiere of Marcos Fernández' homage to Leonard Bernstein, America. Adding to the striking program are Joaquín Turina’s Danzas fantásticas, Ruperto Chapí’s Prelude to La Revoltosa, and Nikolai Rimsky-Korsakov’s Capriccio Espagnol.

On March 11-12, Sameer Patel conducts the world premiere of William Harvey's Seven Decisions of Gandhi featuring the composer as solo violinist. This concerto for violin and full orchestra was inspired by the life of Mahatma Gandhi. The work is set off by Alexander Borodin's thrilling Polovtsian Dances and Tchaikovsky's "Pathétique" Symphony.

Capping the season on May 13-14, the PSO features violist Roberto Díaz in a performance of Hector Berlioz’ Harold in Italy, which musically evokes a young man's wandering among the mountains, a procession of pilgrims, a lover’s serenade, and a gathering of wild brigands. Study for Orchestra spotlights the compositional work of Westminster College graduate Julia Perry, and Gershwin's popular An American in Paris recalls the sights and sounds of the City of Light.

Initially, these concerts are available only by subscription, with single tickets going on sale over the summer. Concerts take place on Saturdays at 8pm and Sundays at 4pm. Subscriptions start at $180. Youths 5-17 receive a 50% discount with an adult purchase. To subscribe, visit the Princeton Symphony Orchestra website at princetonsymphony.org or call 609-497-0020.

Health and Safety
The Princeton Symphony Orchestra is closely monitoring and adhering to the New Jersey Department of Health’s COVID-19 requirements and complies with rules set by partner venues. Concert attendees will receive information regarding safety procedures, entry, seating directions, etc. in advance of their selected live performance(s).

Accessibility
The Princeton Symphony Orchestra is committed to ensuring all programming is accessible for everyone, working with venues to provide needed services. Online events include digital concert resources, closed captioning, and transcriptions as appropriate. If there are questions about these or if any additional services are required, contact ADA Coordinator Kitanya Khateri at kkhateri@princetonsymphony.org or 609 497-0020. Note: some services require at least two weeks’ notice to arrange.

Mr. Milanov has collaborated with Komische Oper Berlin (Shostakovich’s Lady Macbeth of Mtzensk), Opera Oviedo with the Spanish premiere of Tchaikovsky’s Mazzepa and Bartók’s Bluebeard’s Castle (awarded best Spanish production for 2015), and Opera Columbus (Verdi’s La Traviata). He has been seen at New York City Ballet and collaborated with choreographers such as Mats Ek, Benjamin Millepied, and most recently Alexei Ratmansky in the critically acclaimed revival of Swan Lake in Zurich with Zurich Ballet and in Paris with La Scala Ballet.

Mr. Milanov is deeply committed to music education, presenting Link Up education projects with Carnegie Hall and the Orchestra of St. Luke’s and leading the PSO’s annual BRAVO! School Day concerts. He was named Bulgaria’s Musician of the Year in 2005; he won a 2011 ASCAP award for adventurous programming of contemporary music at the PSO; and he was selected as one of the top 100 most influential people in New Jersey in 2014. In 2017, he was recipient of a Columbus Performing Arts Prize awarded by The Columbus Foundation. He is a graduate of the Curtis Institute of Music and The Juilliard School.

The Princeton Symphony Orchestra (PSO) is a cultural centerpiece of the Princeton community and one of New Jersey’s finest music organizations, a position established through performances of beloved masterworks, innovative music by living composers, and an extensive network of educational programs offered to area students free of charge. Led by Edward T. Cone Music Director Rossen Milanov, the PSO presents orchestral, pops, and chamber music programs of the highest artistic quality, supported by lectures and related events that supplement the concert experience. Its flagship summer program the Princeton Festival brings an array of performing arts and artists to Princeton during multiple weeks in June. Through PSO BRAVO!, the orchestra produces wide-reaching and impactful education programs in partnership with local schools and arts organizations that culminate in students attending a live orchestral performance. The PSO receives considerable support from the Princeton community and the New Jersey State Council on the Arts, regularly garnering NJSCA’s highest honor. Recognition of engaging residencies and concerts has come from the National Endowment for the Arts, and the PSO’s commitment to new music has been acknowledged with an ASCAP Award for Adventurous Programming and a Copland Fund Award. The only independent, professional orchestra to make its home in Princeton, the PSO performs at historic Richardson Auditorium on the campus of Princeton University.

Subscriptions are now available for 2022-2023 – our most exciting season yet! Look forward to an amazing line-up of top artists performing stunning showpieces, innovative...