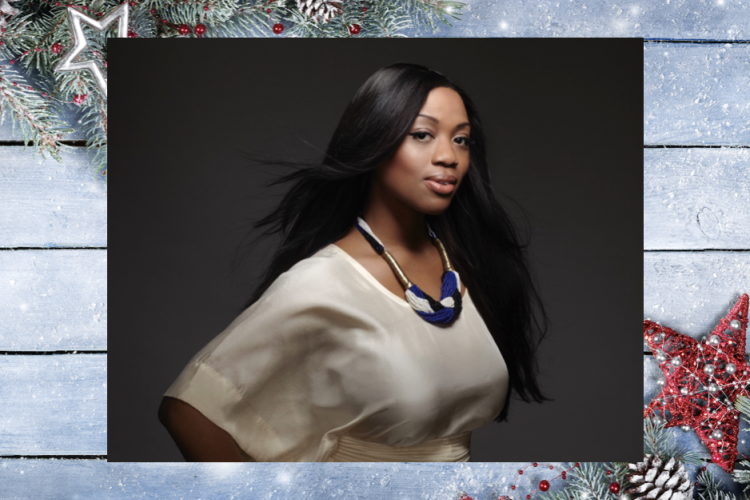 “I’m excited to welcome Laquita Mitchell back to Princeton and have her be a part of our holiday celebration. Her performance will bring a poignancy to this year’s program as well as a note of hope to carry us through to the new year,” says Maestro Milanov.

Soprano Laquita Mitchell dazzled the critics with her début as Bess in Porgy and Bess with the San Francisco Opera. She reprised the role with opera companies and orchestras nationwide and with Grange Park Opera in the UK and the Lithuanian State Symphony. She recently performed the title role in Tom Cipullo’s Josephine with Opera Colorado, as well as The Promise of Living, a concert program conceived by Ms. Mitchell, and performances with the Colorado and Augusta Symphonies. She appeared in New York Philharmonic’s Bandwagon concerts and the Kauffmann Music Center’s Musical Storefront series in spring 2021, and performed with the Columbus Symphony and Rhode Island Philharmonic. Ms. Mitchell performed as soloist in the world première of Pulitzer Prize-winning composer Paul Moravec’s Sanctuary Road at Carnegie Hall with Oratorio Society of New York which was nominated for a 2021 Grammy for Best Choral Performance. In summer 2021, she was featured on Classical Tahoe's 10th Anniversary Season as well as the Bard Music Festival. A native of New York City, and recipient of numerous awards including a 2004 Metropolitan Opera National Council Auditions Grand Prize, a Sara Tucker Award, and First Prize Winner of the Wiener Kammer Oper’s Hans Gabor Belvedere Competition, Ms. Mitchell holds a Master of Music degree and the Professional Studies Certificate at the Manhattan School of Music, and completed undergraduate studies at Westminster Choir College.

Children ages 5-17 are welcome to attend the Holiday POPS! concert at half-price with purchase of an adult ticket. McCarter's COVID-19 policies of Masks/Photo ID/Proof of Full Doses of Vaccination or proof of a negative COVID test result applies to all children, though a birth certificate may be substituted for a photo ID.

Tickets for the Holiday POPS! concert at McCarter Theatre Center’s Matthews Theatre range from $20-$50 for adults and half-price for youths 5-17, and may be ordered through the Princeton Symphony Orchestra website at princetonsymphony.org or by calling the McCarter box office at 609-258-2787.

Health and Safety
The Princeton Symphony Orchestra is closely monitoring and adhering to the New Jersey Department of Health’s COVID-19 Requirements. Concert attendees will receive up-to-date information regarding safety procedures, entry, seating directions, etc. in advance of their selected live performance(s). Additional information can be found via the PSO website’s Health & Safety page.

The Princeton Symphony Orchestra (PSO) is a cultural centerpiece of the Princeton community and one of New Jersey’s finest music organizations, a position established through performances of beloved masterworks, innovative music by living composers, and an extensive network of educational programs offered to area students free of charge. Led by Edward T. Cone Music Director Rossen Milanov, the PSO presents orchestral, pops, and chamber music programs of the highest artistic quality, supported by lectures and related events that supplement the concert experience. Its flagship summer program The Princeton Festival brings an array of performing arts and artists to Princeton during multiple weeks in June. Through PSO BRAVO!, the orchestra produces wide-reaching and impactful education programs in partnership with local schools and arts organizations that culminate in students attending a live orchestral performance. The PSO receives considerable support from the Princeton community and the New Jersey State Council on the Arts, regularly garnering NJSCA’s highest honor. Recognition of engaging residencies and concerts has come from the National Endowment for the Arts, and the PSO’s commitment to new music has been acknowledged with an ASCAP Award for Adventurous Programming and a Copland Fund Award. The only independent, professional orchestra to make its home in Princeton, the PSO performs at historic Richardson Auditorium on the campus of Princeton University.