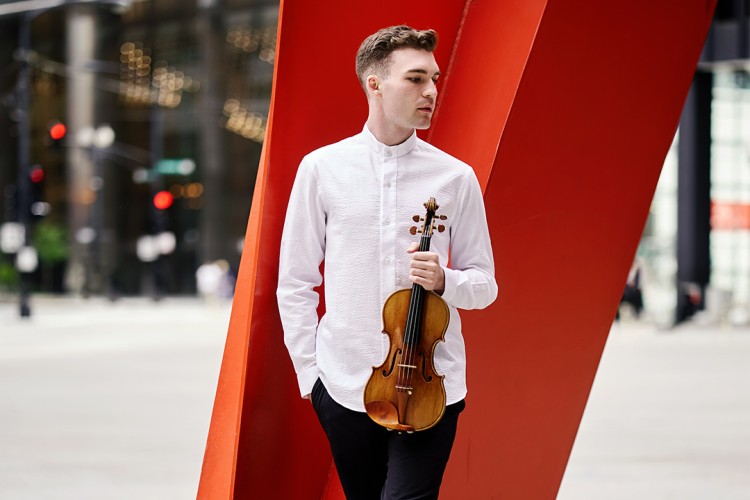 Princeton, NJ—Kenneth Bean, the (PSO) Princeton Symphony Orchestra’s recently appointed Georg and Joyce Albers-Schonberg Assistant Conductor, makes his debut on the podium at performances on Saturday, February 5 at 8pm and Sunday, February 6 at 4:00pm. Rising star violinist Alexi Kenney likewise makes his PSO debut with his interpretation of Jean Sibelius’ Violin Concerto. Also on the program are Samuel Coleridge-Taylor’s Ballade in A Minor, Op. 33 and Antonín Dvořák’s Symphony No. 9, "From the New World." Both concerts take place at the orchestra’s home venue of Richardson Auditorium, on the campus of Princeton University. All attendees are required to wear masks at all times while inside the building, be fully vaccinated for COVID-19, and must have received boosters, if eligible. Tickets are available through the PSO website.

Edward T. Cone Music Director Rossen Milanov is pleased to have the orchestra back at Richardson Auditorium and have Mr. Bean open the 2022 Spring Season. He says, "We are at home at Richardson. It is a very special, intimate concert hall with a wonderful sense of history, and our musicians produce an exceptional sound there. I am thrilled that Kenneth Bean is my artistic partner, and know he can expect a warm welcome from our patrons.”

Kenneth Bean is a conductor in the Philadelphia area, as well as an active freelance trumpeter. He earned a Bachelor of Music degree from the Oberlin Conservatory of Music and a Master of Music Education degree from Jackson State University. He was appointed Georg and Joyce Albers-Schonberg Assistant Conductor of the Princeton Symphony Orchestra in October 2021, and as such serves as conductor of the Youth Orchestra of Central Jersey’s Symphonic Orchestra. He has appeared as a guest conductor for the Marywood String Festival, Berks County Orchestra Festival, and the Oberlin Conservatory of Music. His past music director/conductor appointments include the Junior String Philharmonic of the Lehigh Valley, the Young People’s Philharmonic of the Lehigh Valley, and Luzerne Music Center. He currently serves as assistant conductor of Symphony in C, conductor of the Symphony in C Youth Orchestra in Collingswood, NJ, and director/conductor of the Young Musicians Debut Orchestra of the Philadelphia Youth Orchestra Music Institute.

The recipient of a 2016 Avery Fisher Career Grant and a 2020 Borletti-Buitoni Trust Award, violinist Alexi Kenney is equally at home creating experimental programs and commissioning new works, and soloing with major orchestras in the USA and abroad. In the 2021-22 Season, in addition to his appearance with the PSO, he debuts as soloist with the Pittsburgh Symphony, Orchestra de la Suisse Romande, Virginia Symphony, Reno Philharmonic, Eugene Symphony, and New Haven Symphony, and returns to perform with the Indianapolis Symphony, California Symphony, and Santa Fe Symphony. Winner of the 2013 Concert Artists Guild Competition and laureate of the 2012 Menuhin Competition, he has been profiled by Musical America, Strings Magazine, and The New York Times, and has written for The Strad. Born in Palo Alto, California in 1994, Alexi is a graduate of the New England Conservatory in Boston, where he received his Artist Diploma as a student of Miriam Fried and Donald Weilerstein. He plays a violin made in London by Stefan-Peter Greiner in 2009 and a bow by François-Nicolas Voirin.

Coleridge-Taylor’s Ballade was written in 1898 for the Gloucester, England-based Three Choirs Festival at the suggestion of Edward Elgar, an early endorser of Coleridge-Taylor’s compositional prowess. Sibelius’ singular Violin Concerto is the perfect showcase for a soloist’s virtuosity with its intricate passages and cadenzas, and Dvořák’s “New World” Symphony provides a window onto the composer’s interpretations of musical elements he encountered during visits to the United States in the late 19th century.

Tickets for the February 5 and 6 performances at Richardson Auditorium start at $20, youth (ages 5-17) are half price, and may be ordered through the Princeton Symphony Orchestra website at princetonsymphony.org or by calling 609-497-0020.

Health and Safety
Along with adhering to the New Jersey Department of Health's COVID-19 guidelines, the Princeton Symphony Orchestra is working closely with our venues to ensure your safety and comfort. Princeton University has a strict visitor policy in place. There will be a vaccination plus booster requirement with no exceptions. For details and to keep up to date with the most recent COVID safety requirements, please visit our Health & Safety website page.

Saturday, February 5 at 8pm and Sunday, February 6 at 4:00pm – Live Concert – Violinist Alexi Kenney makes his Princeton Symphony Orchestra debut with performances of Jean Sibelius’ Violin Concerto. Also on the program are Samuel Coleridge-Taylor’s Ballade in A Minor, Op. 33 and Antonín Dvořák’s “Symphony No. 9, "From the New World." Kenneth Bean conducts. Richardson Auditorium, Alexander Hall, Princeton University Campus, Princeton, NJ. Tickets: start at $20 (children 5-17 who are accompanied by an adult receive a 50% discount); Accommodations or services can be arranged with two weeks’ notice, contact Kitanya at kkhateri@princetonsymphony.org; For tickets: princetonsymphony.org or 609-497-0020.